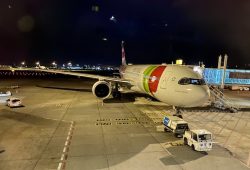 Check our experience in one of TAP’s most popular long-haul routes!

Check-in in Brussels:
As I didn’t have any checked luggage and already had checked in online, I went straight to the security check. Brussels Airport works in a quick and efficient way, so I was at the gate A66 approximately around 15 minutes after arrival.

Boarding in Brussels:
The boarding to Lisbon started around 19:00 at the Gate A66. Star Alliance Gold / Business Class passengers boarded first followed by those who didn’t have any carry-on luggage. Then the passengers who had carry-on bags had to board on “A” or “B” areas accordingly to their seat number. I got seat 9F and was one of the last ones to get on the plane. As my previous similar boarding experience with GOL and with TAP, I find that this is makes the process quicker and more efficient. 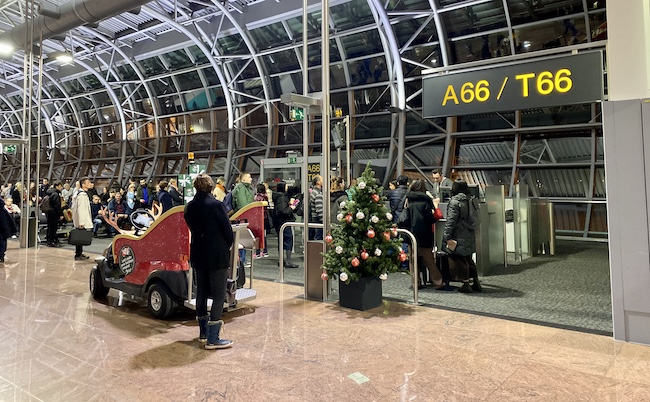 Flight TP649:
The Airbus A319 was divided in two classes (or three if we consider Economy Xtra a class). On some TAP flights in Europe, the Economy Xtra seats were available without paying any extra so I chose one of them when checking in. It was comfortable, had decent legroom, USB, electrical outputs and an adjustable headrest which is a plus. Its a overall better experience than the “normal” seats that I was assigned when flying to Sao Tome and should be exponentially better when the flight takes around 8h as it did when I flew to the small African nation. 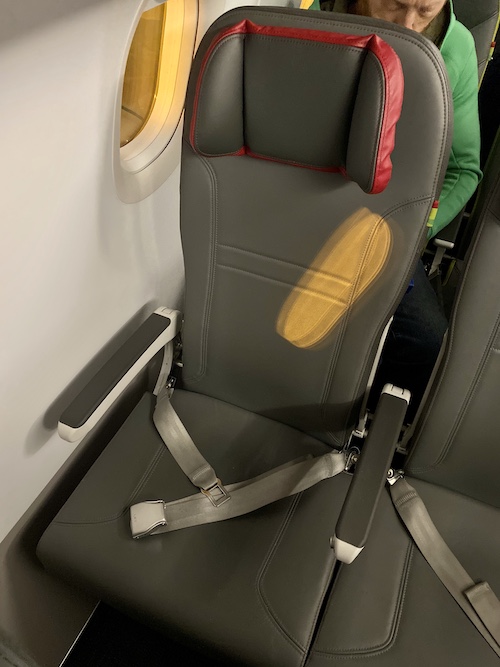 TAP belongs to the increasingly small group of airlines that nowadays still have at least a snack / beverage service free of charge on most of its flights, usually a simple sandwich and a drink.  I was very surprised when they served a hot dinner to all passengers on this 2:30h flight. The only choice available was spinach ravioli in tomato sauce with a mini apple pie for desert. It was more than good for this kind of flight. 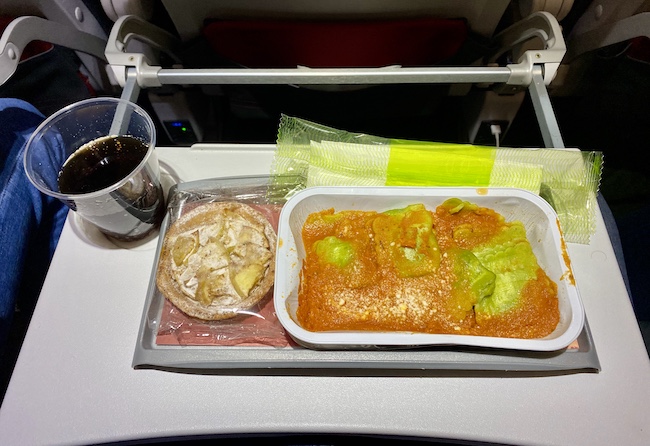 Boarding in Lisbon:
After landing in Lisbon, I took the time I had to stretch the legs a bit and to go to the non-Schengen area of Humberto Delgado Passport. After a quick passport check, I went straight to the gate N45. Boarding started at around 22:50, following the same procedure already described for BRU-LIS flight. 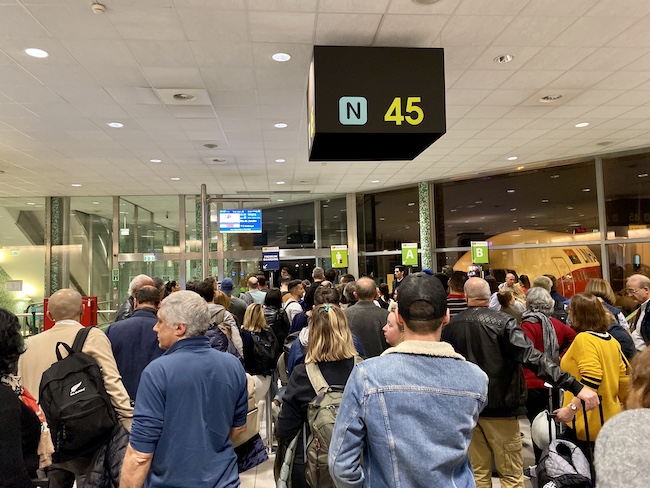 Flight TP75:
The Airbus A330neo was divided in two classes. The business class, set in 1-2-1 configuration, while economy (both “Xtra” and the traditional one) was set in in 2-4-2, increasingly rare configuration nowadays and one that I particularly like. I was assigned to the seat 38K (for long haul flights TAP charges for the seat selection on lower tariffs). Comparing to an A330ceo or B777, the cabin is feels more open and overall more comfortable. I also noticed that both the noise and vibration from the engines were significantly reduced. 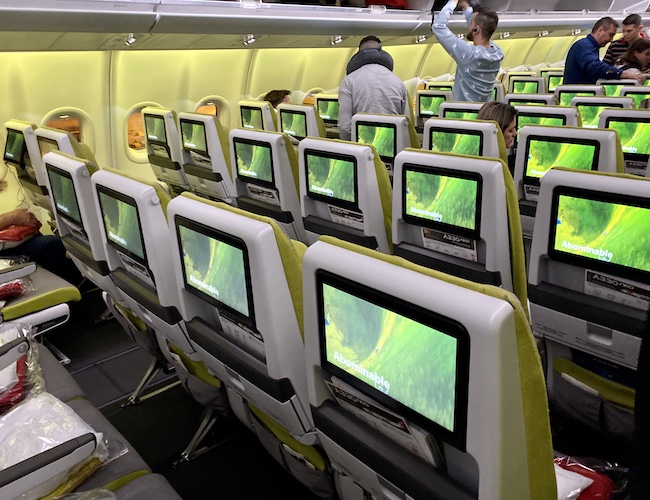 Earphones, a comfortable blanket and a pillow were available for all passengers.

If you read our trip report onboard TAP’s A321LR on São Tome-Lisbon flight, you will see that the seats are exactly the same. They are comfortable, have decent legroom (not great), adjustable headrest, electrical and USB output, and a huge IFE screen which sets it apart from the most of the competitors long haul products that I flew recently. There was again a huge selection of movies (110 in total) and TV shows (78 episodes in total) with very recent releases. 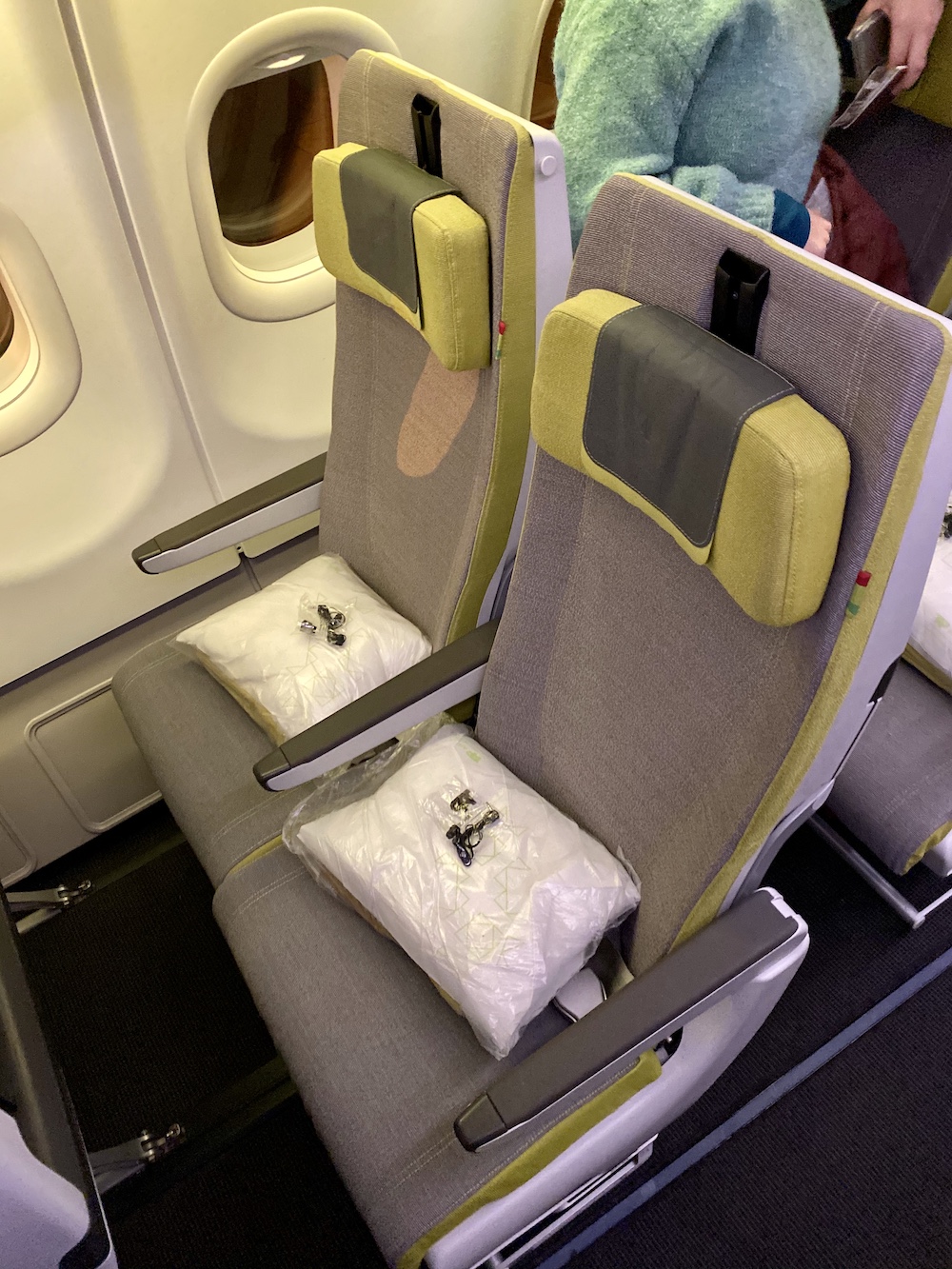 As I also described on LIS-TMS, TAP also offers a free wi-fi package to all passengers trough the whole flight to use messaging apps including iMessage, WhatsApp and Facebook Messenger. This time, it was available and working during all the flight. 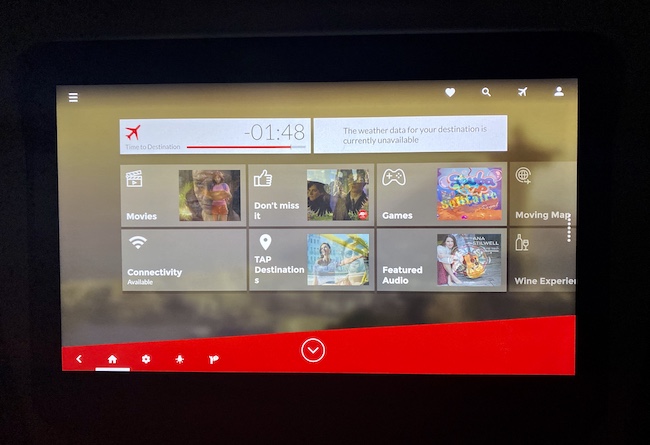 Around 1h30 after departure, dinner was served. Passengers could chose one of the two options:

Apart from the main dish passengers were also offered a salad, a drink, a bun, butter and almond and vanilla mousse for desert. I chose the codfish and it was good. From my experience, TAP is very consistent in catering departure. Rarely amazing (the dinner on TMS-LIS was great) but never a bad experience. 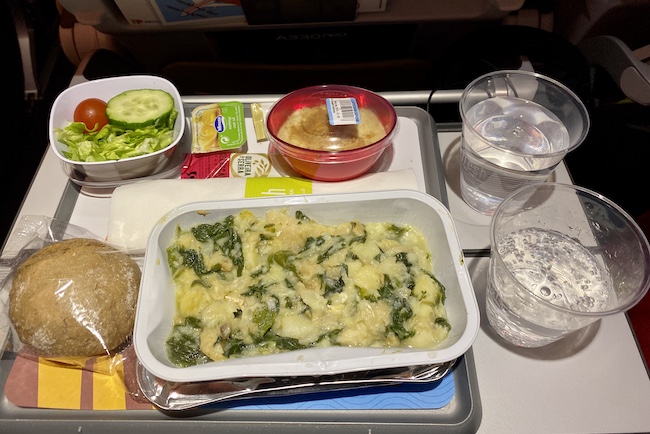 After the meal passengers were offered tea / coffee or any other drink.

After the meal, the crew dimmed the lights which meant time for a movie and to try to sleep a bit.

Around 1h before landing in GIG, it was time for breakfast. Passengers were offered a bun, butter, jam cold slices of cheese and smoked meat, and two slices of orange. Water, coffee, tea and other beverages were available. 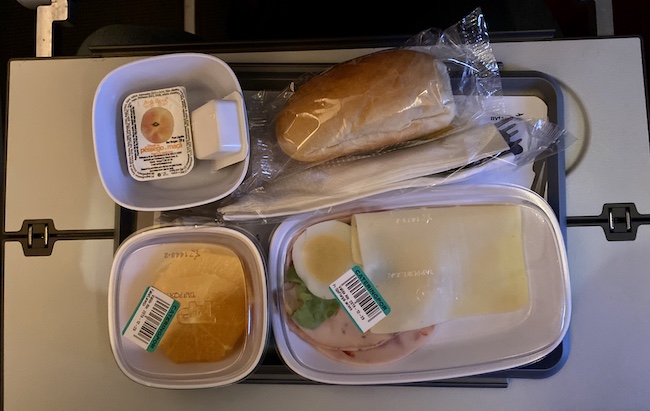 Cabin crew was polite and professional during the duration of the flight.

Check-in in Tom Jobim Airport (GIG):
As I arrived around 3h before the flight, I went to TAP’s check in desk to try to check my cabin bag for free, to avoid carrying it trough the airport and to board first, using the line for passengers without cabin bag. TAP does this on most of the flights to have a smooth and less cahotic boarding since they have less passengers trying to put the bags in the overhead bin, blocking the aisles. After checking my bag I went straight to the security. There was no one on the line, so it took me around 5 minutes to reach to the airside. 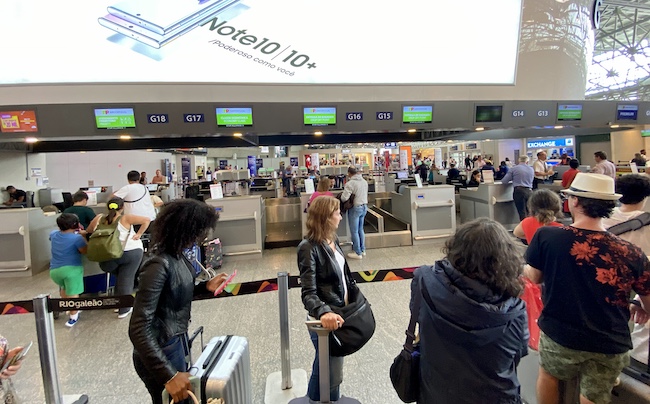 Boarding in Rio de Janeiro:
Boarding started at around 16:34h at the gate C66 following the usual procedure. All went quickly and smoothly. 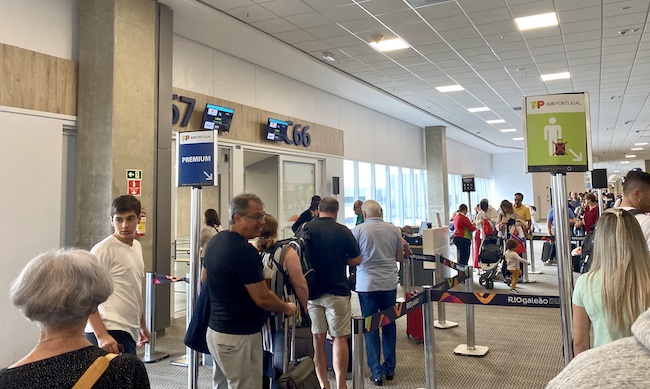 Flight TP74:
As I did the online check-in only when I was commuting to the Airport, and probably the regular economy seats were already all taken, I was assigned the seat 20k, in the Economy Xtra section of the aircraft. The two main differences between this subclass and the “normal” one are the significantly better legroom and a bigger reclining angle. 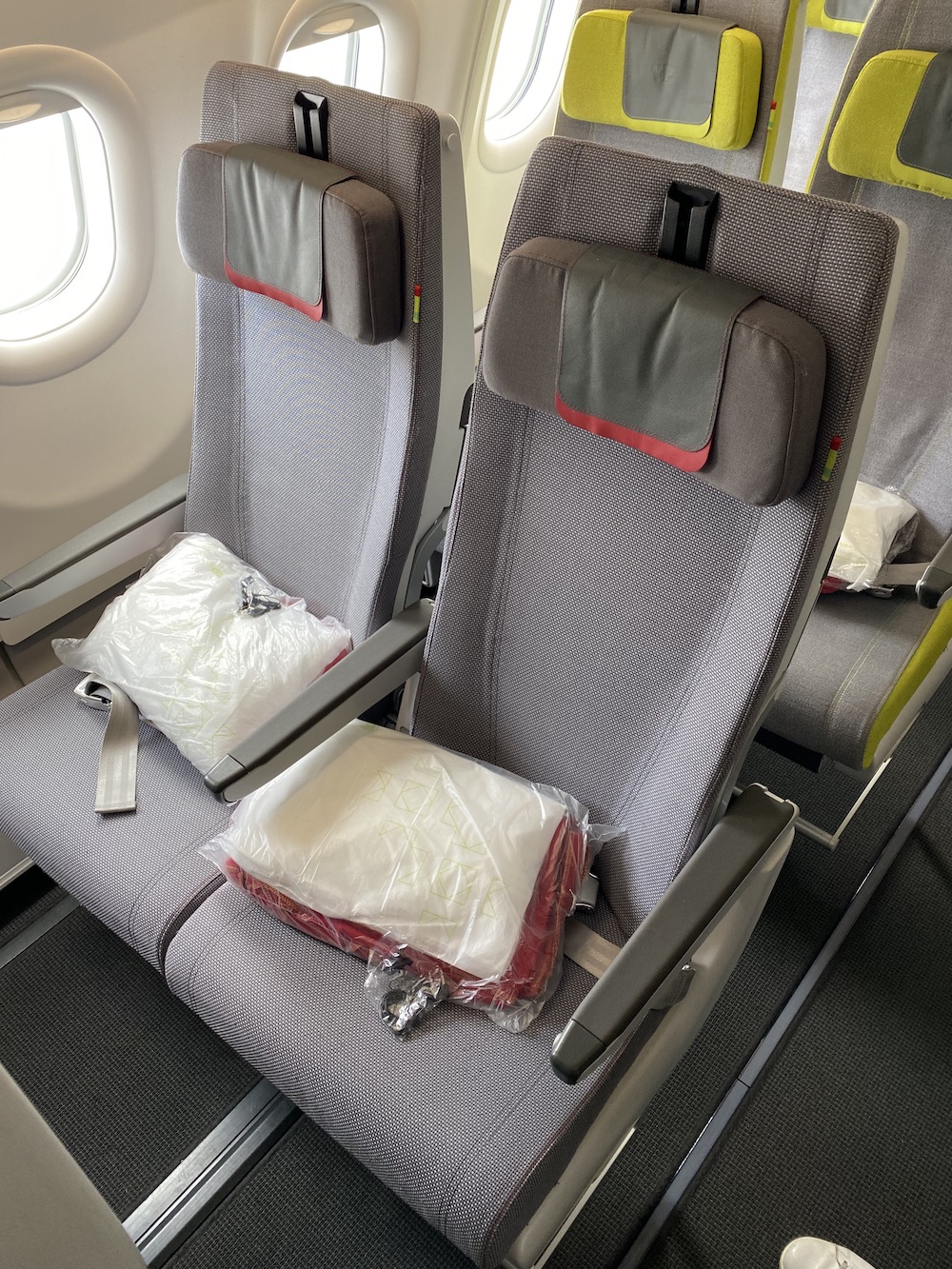 Apart from this and the color, the seats are exactly the same, IFE system included. While I think that wasn’t worth the €60 extra one-way that TAP asks for the seat, truth is that it can be money well spent it for those that find economy class legroom too small, especially taller people. 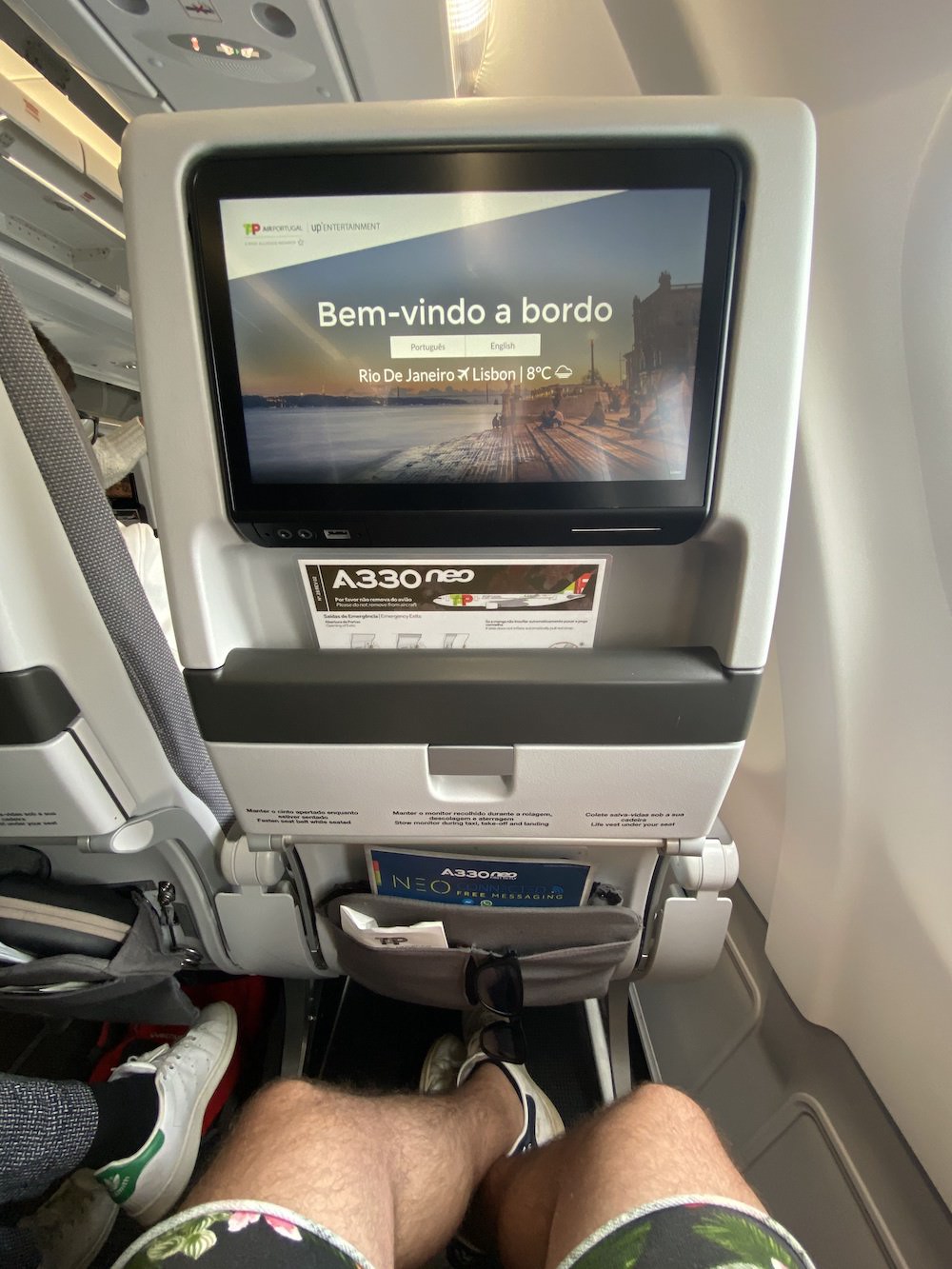 Once again, earphones, a comfortable blanket and a pillow were given to all passengers.

TAP flight TP75 took off from Tom Jobim International Airport (GIG) at around 17h20, 10 minutos after the ETD.

Around 1h30 after departure, dinner was served. Passengers could chose one of the two options:

–  Chicken with rice (Again. Apparently, according to the flight attendant, it’s a sure pick on this route, so they have it in the menu often).

Apart from the main dish passengers were also offered a salad, a drink, a bun, butter and chocolate cake for desert. I chose the raviolis and they were good but the codfish on LIS-GIG was better. 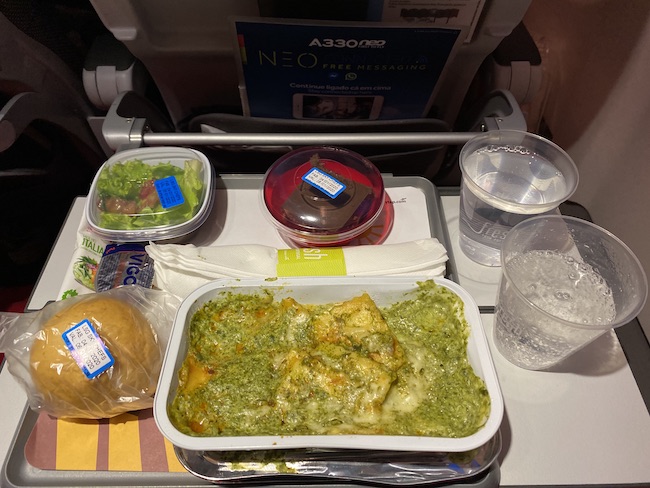 Earphones, a comfortable blanket and a pillow were available for all passengers.

After dinner, lights were dimmed I chose to sleep a bit, taking advantage of the extra recline of the seat.

Around 50 min before landing in LIS, passengers were served breakfast. It consisted in a bun, butter, jam cold slices of cheese and smoked meat, and a small fruit salad. Water, coffee, tea and other beverages were available. 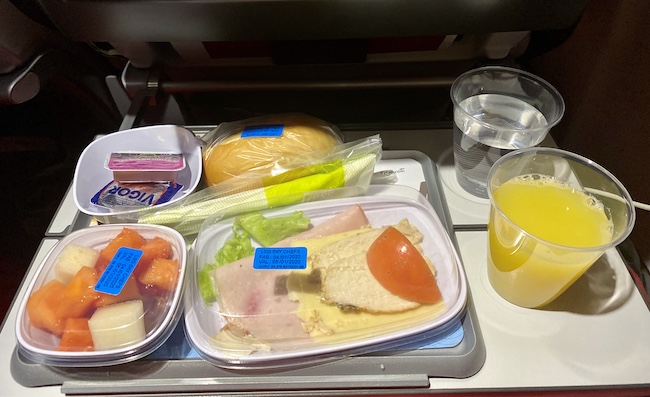 Again, nothing to point out regarding the crew.

Bottom line:
After flying TAP’s A321LR, my expectations were that the A330neo was as good and I wasn’t disappointed. The only time I flew TAP’s on a long haul with wide-body was in LIS-LAD route, always with old (but mythical for Portuguese avgeeks) A340-300. The difference is abismal, but even comparing with my recent long-haul flights with KLM and Air France, for example, TAP’s hard product is very good. The free WiFi for messaging and the IFE system deserve a special mention. As I wrote about the A321LR, the A330neo has the potential to be a game changer for the airline. But before that, they need to improve in their operational and customer service factors, which prevent it from being a great airline.